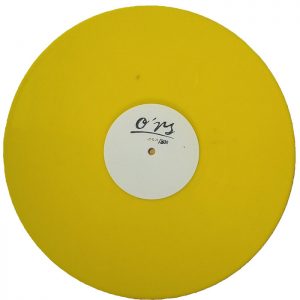 After the successful digital release of Rampue's "Mimesis“ Remix on Thomas Scholz ASLE EP, O*RS is presenting their newest project. The Leipzig based imprint adds the already timeless piece of work to four tracks: O*RS 2200 – a12″ vinyl, which takes the listener on a fantastic auditive journey.
The record starts inimitably good with Rampue's beautiful interpretation of Thomas Scholz track „Mimesis“. Following the remix, which had been clearly influenced by the Berlin musician, an original track by Filburt is added. With "Beside the Biz" Filburt proves once again that music is more than just a sideline. The rhythm of the bass line blends in perfectly with the complex sounds and simultaneouly intensifies the vocals, which invite the listener to dance.
"Close“ is just as innovative and unconventional. Being the only lady in this experienced artistic circle and also the youngest (she's only 17), Saskia Hubert alias Crooks + Lovers delivers a unique piece, which convinces with its minimal sound, soft vocals and a reduced arrangement, which is still very much club-compatible.
The producer Jan Ketel proves with his track "Wrong Number" once again his intuition for sounds. The by all means dashing house track give the record the perfect drive. Danceable, energetic and at the same time slightly dub-oriented, the track picks up speed right from the beginning and is therefore definetly always a great choice in a club.
Ron Deacon's track rounds of the record and takes the listener to the deep pheres of the night. "Late Night" emphasizes the club-sound-character of O*RS 2200 and pushes it to its limit. Deep House chords meet soft synth-sounds and a strong bass line, which gets everybody hit the dance floor.
Format: vinyl
Cat. Number: O*RS 2200
Release: 15.09.2014